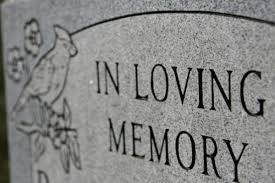 The rules about what types of memorials are allowed in Church of England churchyards are very strict. People generally believe that because there are already white marble/black granite/ kerbs etc. in a particular churchyard that they will be allowed to have the same. There is also a belief that because they know the vicar they will be allowed some leniency – both are rarely true. Below are a typical set of rules for the introduction of memorials to Church of England churchyards.

The Chancellor has delegated to the Incumbent power within his/her sole discretion to permit the introduction into his churchyard of monuments falling within the following provisions:
(i) A simple headstone. Its face must be flat and not curved and it must be erected vertically from the ground. The dimensions shall not be more than 4ft 6ins high, 3ft wide and 6ins thick and not less than 2ft 6ins high, 1ft 6ins wide and 3ins thick (slate 2ins,). (These height and width measurements include the base.) A headstone shall not be erected within 4ft of the outer wall of the church.
(ii) (a) A base forming an integral part of the design of a headstone is permitted. It shall be properly secured to the headstone, preferably by two non ferrous metal dowels, and these must be at least 4ins in length. All joints must be firmly fixed. The base shall not project more than 4ins beyond the headstone in any direction (except where a vase is incorporated when the base may extend a maximum of 8ins in front of the headstone). The base shall itself be fixed on a foundation slab (which may be reinforced concrete) which must be positioned just below the turf so that a mower may pass freely over it. The foundation slab shall extend beyond the base by between 3 and 5ins all round.
(b) For free standing memorials the headstone should be set in the soil, to a minimum depth of 15ins or, alternatively, the stone should be fixed using two jockey blocks at least 15ins x 6ins x 3ins, set below ground level.
(iii) Natural stone vases which are permitted shall be not more than 12ins x 8ins x 8ins in 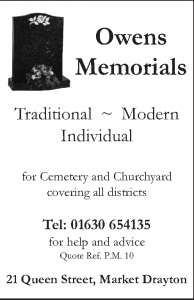 size. A vase may be incorporated into the base of the headstone. Glass containers are prohibited.
(iv) A simple cross. Its face must be flat and it must be erected vertically from the ground. It must not exceed 4ft 6ins in height nor 2ft 9ins in width. It must be firmly fixed on a base in a similar manner to a headstone. Its materials must comply with regulation 10 below.
(v) A simple horizontal ledger which must not exceed 2ft 9ins in width nor 6ft in length. The top of the ledger must be flush with the adjoining ground and must not protrude upwards above the adjoining ground.

8 Representations have been made to the Chancellor that in some cases the size of these memorials might be reduced to below the minimum dimensions contained in the churchyard regulations set out above. For pastoral reasons he is sympathetic to those representations although he is also concerned that memorials should be large enough to be easily seen so that they are not damaged inadvertently and that they should be strong enough to survive accidental knocks. He therefore delegates to an incumbent power within his sole discretion to permit the introduction into his churchyard of a simple memorial for a young child with a minimum size of 1ft 6ins in height by 1ft in width by 3ins thick. This discretion may be exercised in respect of memorials to young children who have died under the age of 10 years.

9 (i) The burial of cremated remains may, subject to (ii) below be commemorated by tablets or plaques (including wedge shaped tablets) not exceeding 1ft 9ins square. A vase may be incorporated into the tablet. Such tablets or plaques must be flush with the turf.

(ii) Where a part of the churchyard has been specially set aside by faculty for the burial of cremated remains, no tablet, plaque, monument or vase shall be introduced into that area except in accordance with the terms of the faculty setting aside the area

10 Monuments shall be of natural stone (including slate and grey granite) but not black, red or Scottish granite or marble, which are prohibited. Monuments may also be of teak or oak but unpainted and unvarnished. Stones traditionally used in local buildings or closely similar to them in colour and texture are to be preferred. The stone including the lettering surface shall not be mirror polished (i.e. polished so as to reflect) or be above what is commonly called an eggshell finish. No monuments (or vases) shall be of synthetic stone or plastic.

KERBS AND OTHER PROHIBITED THINGS

11 No monument shall include any kerb, railings, fencing, chippings of any kind, statue, sundial, birdbath, photograph, laminated card or any other object or thing unless it is expressly permitted by these regulations. No stone may be in the shape of a specific object such as a heart or book or boulder. Every monument shall be simple in shape.

12 Inscriptions should be simple, dignified and reverent. Passing sentiments are to be avoided. Encouraged are brief epitaphs with biblical or well-known hymnal words which reflect the life and work of the deceased. If the incumbent objects to the proposed wording, he/she should advise the applicant to apply for a faculty.