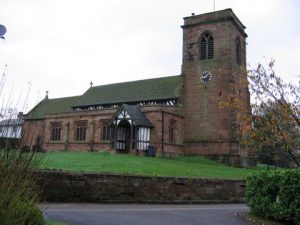 St. Margaret’s Church is a Grade One listed building and has borne witness to a Christian presence in the village for over 700 years. Its exterior and interior have been much influenced by passing generations, and now more recently the interior has been extensively modernised.

(This outline history of the church up to 1900 is taken from the article on Betley written by Dr Nigel Tringham of Keele University for volume XI of the Victoria County History of Staffordshire (forthcoming in 2013). Full references to all the statements will be found in the volume.)

The first church probably dates to the early 13th century, when a charter (now lost, and of uncertain date) recorded the grant of land to ‘Blessed Mary of Betley’. Such a date is quite possible, and even if somewhat later the church presumably stood on its present site, where a minor road runs eastwards towards Audley which was Betley’s mother church for most of the middle ages. The church at Betley, therefore, would have been served by a curate under the vicar of Audley. Very little information survives for this period, although we know of a chaplain in the 1330s, appropriately named Adam Wisebird (Wysbrid). Although not actually recorded in a document until the mid 19th century, the present dedication to St Margaret is probably of medieval origin, perhaps given when the church was rebuilt at some stage: in 1220 the lords of Betley were granted the right to hold a weekly market and also an annual fair, the latter being on the feast of St Margaret (20 July). Connected with the market and fair, Betley was also made into a borough, meaning that inhabitants had certain legal and economic privileges, and this may have resulted in improvements to the church, such as the medieval wall painting that was revealed when the west gallery was taken down in 1956; it was plastered over in 1960. 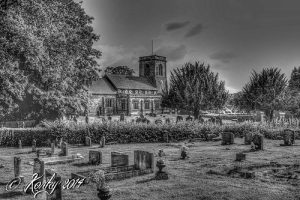 Again, lack of surviving evidence means that we do not know what sort of impact the Reformation had on the parish, but there are signs of ‘puritan’ sympathies in the early 17th century, probably under the influence of the lord of the manor Ralph Egerton (d. 1610), who left 100 pound to provide an annual income of 10 pounds for a preaching minister and gave land for a house; in doing this he secured Betley’s separation from the mother church at Audley. Egerton also also instructed his executors to ‘repair’ (possibly meaning to rebuild) the chancel, and the new work was marked by an impressive wall monument for Ralph and his wife Frances, possibly commissioned by her as it stresses her lineage. In 1616 Frances also donated what was probably originally a three-decker pulpit, of which the bottom part survives.

Leanings towards Puritanism are also indicated by the curate William Paretree being presented in 1616 for administering Holy Communion to people who were not kneeling and for failing to read the Book of Common Prayer, whilst his successor Ralph Hulme was left an income as part of several bequests to preaching ministers in the area. During the Commonwealth period (when the Church of England was abolished), church services may have been taken by Presbyterians: even after the Restoration of 1660, two local Presbyterian ministers preached in the church in 1668, perhaps at the invitation of Richard Steele who had been the vicar of Barthomley before the Civil War. But protestant nonconformity did not survive in the parish, and the setting up of royal arms in 1681 shows that the restored Church of England was welcomed locally.

Parishioners had built a new steeple in 1638, and this was itself rebuilt in 1690, with a Nantwich man, John Clowes, as carpenter; it was blown down the following year and had to be rebuilt in 1693. As a result there was a large parish debt, partly relieved by charitable donations such as the 20 pounds bequeathed by Hannah Jones of London (perhaps a native of Betley), but once everything was paid off it was possible to install four new bells, cast in 1711.

Betley had some long-serving curates during the 18th century, notably John Salt 1704-42 (but also from 1721 vicar of Audley where he mainly lived); others were connected with the Cradock family of Betley Court (Charles Cradock, 1751-53) or the Tollet family of Betley Hall (James Oates, 1766-84). They too also served Audley, and so parishioners in Betley may have been somewhat neglected, and this may have been the context for the Methodist evangelist Richard Moss holding a meeting somewhere in the village in 1745, much to the disgust of the assistant curate William Wright and the lawyer John Cradock of Betley Court.

But most parishioners were evidently loyal Anglicans, and some of them formed a band of psalm singers, perhaps as early as 1727 when singers from Audley were entertained in Betley church. Singing teachers came to the parish later in the century, and by at least the 1780s there was also a band of instrumentalists: the churchwardens regularly spent money on the bassoon and bass viol (a kind of violincello), and by 1817 there was also a clarionet. Both singers and players presumably occupied a west gallery, as was usual in other churches at this time.

It is not until the early 19th century that we have a written description of the church: the nave and chancel were then separated by a wooden screen with the pulpit, clerk’s desk, and reading desk on its south side. The upper part of the screen facing the nave carried three painted tables (Lord’s Prayer, Creed, and Commandments) with a dove in glory depicted above the first two and the royal arms above the third with a group of angels on either side. The nave was filled with box pews, whilst the chapel at the east end had been converted into a large seat for Sir Thomas Fletcher of Betley Court.

A major influence from 1820 was the new vicar Henry Turton, who oversaw a large-scale restoration of the church fabric in the 1840s under G. G. Scott and W. B. Moffatt: the north and south aisles were widened and the chancel arch removed, although the distinctive late medieval timber-framing was preserved. An organ seems to have been installed at this time, and in 1850 Turton was buying hymn books, which suggest that congregational singing was not being encouraged. When the nation-wide census of religious attendances was taken in 1851, twice as many people attended the church as the Wesleyan chapel (opened in 1808). 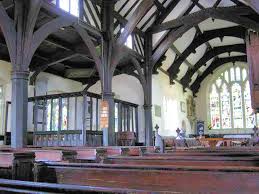 St. Margaret’s is essentially a timber church and is said to be, with the exception of the church at Rushton Spencer, the only church in the country which retains so much timber in its construction. This is clearly seen in the Nave with its arcades of four bays and the timber roof supports. The wood which was used is Spanish (Sweet) Chestnut and the pillars of the arcades each consist of a single tree trunk. The small chapel in the north aisle is surrounded by a 14th or 15th Century screen which is also of Spanish Chestnut. This side chapel was originally the seat of the Thicknesse family who were ancient landowners in Betley and Balterley and it is now used for weekday prayers. The church pulpit is Jacobean with the usual decoration of two tiers of blank arches. The chancel was built in 1610 by Ralph Egerton of Wrinehill whose family held the manor of Betley at that time. The family monument is still to be seen on the chancel wall. The magnificent east window is a 20th Century creation dedicated to the memory of Thomas, a member of the Fletcher-Twemlow family of Betley Court, who at the age of 15 was struck on the head by a cricket ball on his school playing field and died. The organ, which is located in the chancel, is a splendid Victorian instrument which has recently been fully renovated and restored.

At the west end of the church a steeple was constructed in 1690 but in the following summer it was blown down causing considerable damage to the church. The present church tower with its peel of bells, which replaced the steeple, dates from 1713 and was again a contribution from the Egerton family. Inside the church against the west wall where the Millennium Tapestry now hangs a gallery was built in 1719. This was removed in the 1950’s as it had become unsafe. 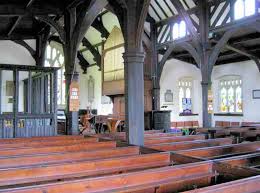 Major restoration of the church took place in the 1840’s under the direction of George Gilbert Scott who later became a famous builder and restorer of Gothic churches. The present north and south aisles were very much his creation and he describes St. Margaret’s as a very curious and valuable piece of antiquity.

In the south aisle is the Betley War Memorial Window and the subjects of this window are indicated on the key-plan which is to be found on the window sill. There is an interesting stained glass window at the end of the south aisle next to the pulpit. It is in memory of Lionel Tatham who died in 1894 and his son who was killed in action at Ypres in 1915. It depicts a small boy and a Roman soldier and illustrates the story of St. Tarsicius, a young acolyte, who lost his life defending the Holy Sacrament which he was carrying to the martyrs who were in prison.

The charity boards which are on display at the back of the church indicate the ancient bequests from members of the parish and the income from these is still distributed today by the Betley Trust.