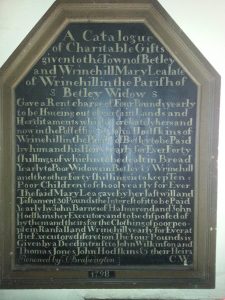 In the 16th and 17th century the church received a number of benefactions, details of which can
be seen on the charity boards at the west end of the nave. Bequests were made for the instruction of poor children, apprenticeships and relief. By today’s standards the sums of money involved seem paltry but they were sizeable amounts for the time – so much so that distribution from these bequests still continues today.

In more recent times these have been amalgamated into one Trust and named The Betley Trust.