St Margaret’s actually contains two fonts, one by the entrance, and a movable one stored up by the main altar.

The History of the Font

Every medieval church contained a font.

It was close to the main entrance of the church in an area known as the baptistry.  Today, fonts may be found elsewhere in the church.

The word font is derived from the Latin word ‘fons’ which means spring.

The font contains the holy water used in Baptism.

They were originally large enough to allow the infant to be fully immersed, but in the middle ages it became the practice to baptise by partial immersion or pouring water over the head.

In 1236 it was ordered that all fonts should have a lockable lid.  The water was generally only changed once per year, on Easter Sunday!

According to the William Salt Library, it looks like at some point, the fixed font was used for other purposes.

The movable font, stored at the high altar, has the inscription,

In memory of Judith Parkes of Betley.
Friend of the village, and of St Margarets. 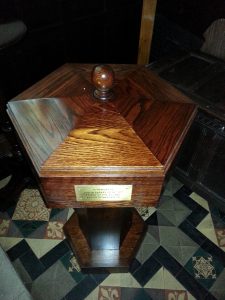