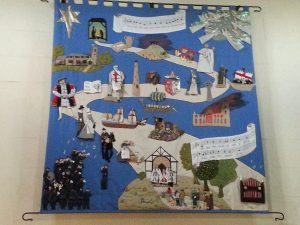 Situated on the west wall above the Vestry door. It was researched and designed by Mrs. Thelma Peake and produced by St. Margaret’s Tapestry Group. It was inspired by the hymn ‘It came upon the midnight clear’ using the lines:

“Beneath the angel-strain have rolled
Two thousand years of wrong;
O hush the noise of mortal strife
And hear the angels sing!”

It tells the story of the spread of Christianity from Bethlehem to Betley. 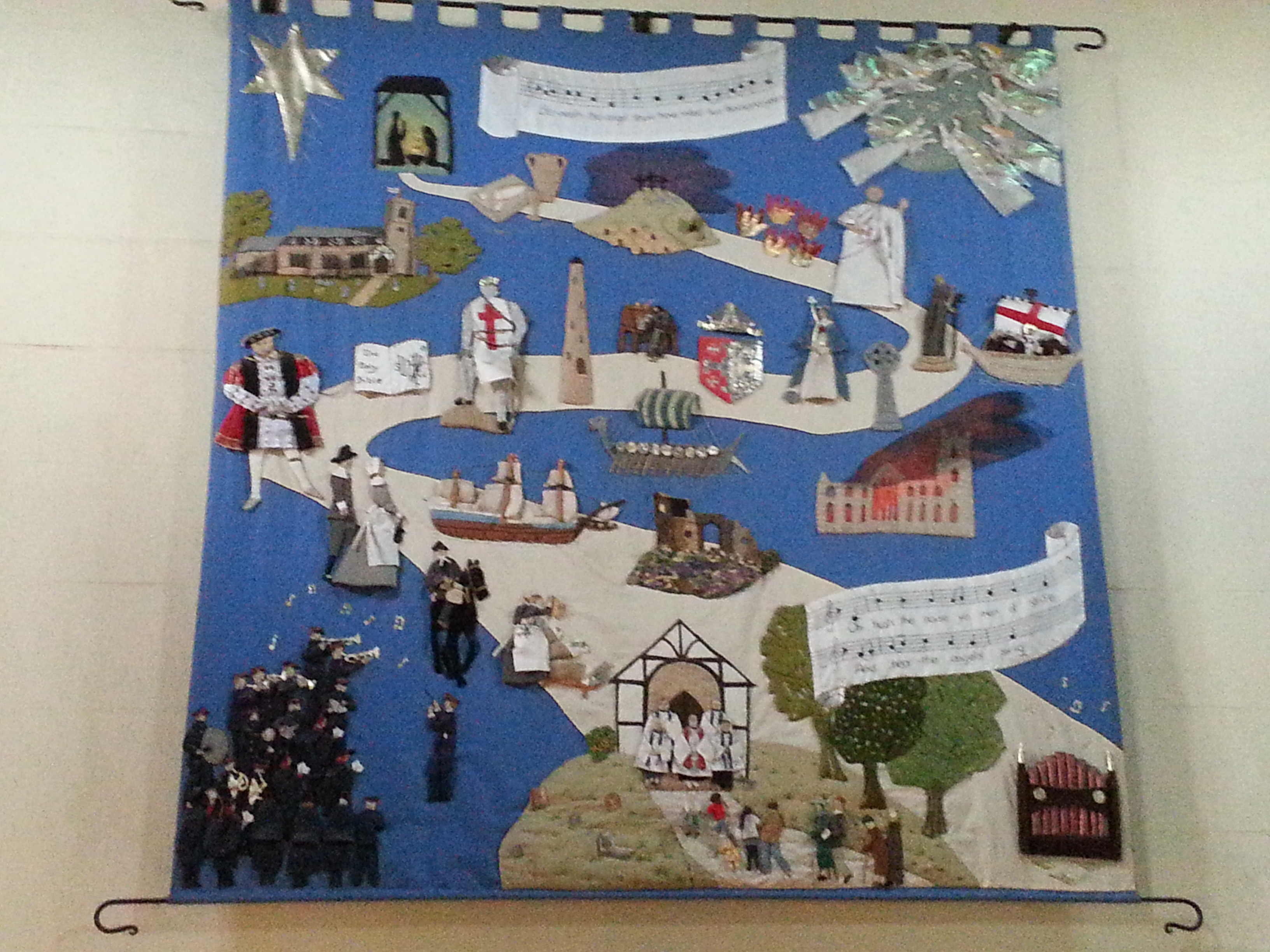 1
Beneath the angel-strain have rolled Two thousand years
Taken from "It came upon a midnight clear".

Yet with the woes of sin and strife The world has suffered long; Beneath the angel-strain have rolled Two thousand years of wrong; And man, at war with man, hears not The love-song which they bring; O hush the noise, ye men of strife, And hear the angels sing. 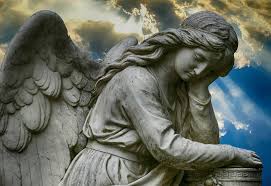 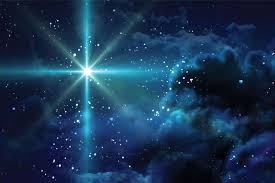 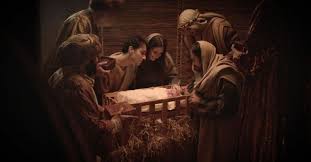 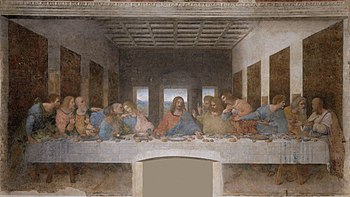 The Last Supper is the final meal that, in the Gospel accounts, Jesus shared with his Apostles in Jerusalem before his crucifixion.
6
Calvary
Calvary is the hill in Jerusalem where Jesus was crucified.
7
Pentecost 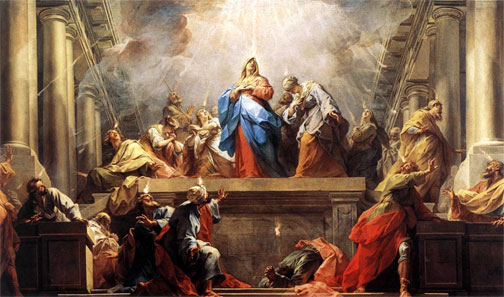 Pentecost (which comes from the Greek word for ‘fiftieth’) has its roots in the Jewish Feast of Weeks. Jesus had promised his followers that, although they would not see him after his Ascension, they would receive the Holy Spirit to guide and inspire them. The Acts of the Apostles describes how the crowds gathered in Jerusalem – representing many nationalities and speaking many languages – were able to hear the disciples preaching in their own language.
8
Emperor Constantine
Constantine was the first Roman emperor to convert to Christianity. Although he lived most of his life as a pagan, he joined the Christian faith on his deathbed, being baptised by Eusebius of Nicomedia. He played an influential role in the proclamation of the Edict of Milan in 313, which declared religious tolerance for Christianity in the Roman empire. He called the First Council of Nicaea in 325 that produced the statement of Christian belief known as the Nicene Creed. The Church of the Holy Sepulchre was built on his orders at the purported site of Jesus' tomb in Jerusalem and became the holiest place in Christendom
9
St Augustine
Saint Augustine of Hippo was a Roman African, early Christian theologian and philosopher from Numidia whose writings influenced the development of Western Christianity and Western philosophy.

10
St Aiden
11
St Cuthbert and St Columba
Saint Cuthbert (c. 634 – 20 March 687) is credited with bringing Christianity to Scotland. He was a monk, bishop and hermit, associated with the monasteries of Melrose and Lindisfarne in what might loosely be termed the Kingdom of Northumbria in the North East of England and the South East of Scotland. After his death he became one of the most important medieval saints of Northern England. Saint Columba was an Irish abbot and missionary credited with spreading Christianity in what is today Scotland at the start of the Hiberno-Scottish mission.
12
St Hilda
13
St Chad
14
The Venerable Bede (673 AD - 735 AD)
15
Pele Tower
Peel towers (also spelt pele) are small fortified keeps or tower houses, built along the English and Scottish borders in the Scottish Marches and North of England, intended as watch towers where signal fires could be lit by the garrison to warn of approaching danger.
16
Viking Longship
The Vikings used a variety of vessels for different purposes, from broad ships to fishing vessels, but the longship is the most iconic ship associated with them. The longship was sturdy enough to traverse the seas but nimble enough to navigate rivers, It could be powered by sails or by oars, depending on conditions. The longship was among the first to feature a keel, giving it greater stability in the ocean. Longships were even used for the burials of important people, male and female. Longships helped the Vikings rule the seas from the 9th to 11th centuries, spreading their influence as far as North America, Africa and Asia. Wherever the Vikings went, their ships proved to be an inspiration - not only to shipbuilders, but also to artists.
17
Crusades 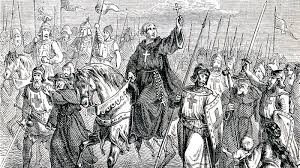 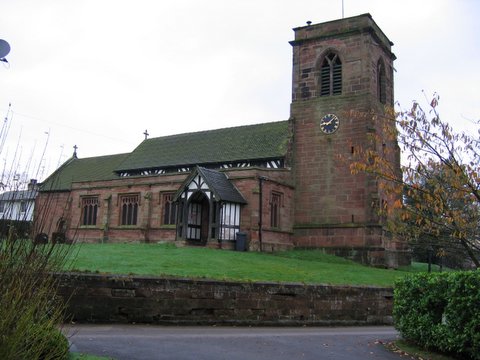 19
William Caxton
20
Henry VIII
The Supreme Head of the Church of England was a title created in 1531 for King Henry VIII of England, who was responsible for the foundation of the English Protestant church that broke away from the authority of the Roman Catholic Church after Pope Paul III excommunicated Henry in 1533 over his divorce from Catherine of Aragon.
21
The Dissolution of the Monasteries
The Dissolution of the Monasteries, sometimes referred to as the Suppression of the Monasteries, was the set of administrative and legal processes between 1536 and 1541 by which Henry VIII disbanded monasteries, priories, convents and friaries in England and Wales and Ireland, appropriated their income, disposed of their assets, and provided for their former personnel and functions.
22
Puritans
The Puritans were English Reformed Protestants in the 16th and 17th centuries who sought to "purify" the Church of England from its "Catholic" practices, maintaining that the Church of England was only partially reformed
23
Mayflower
The Mayflower was an English ship that famously transported the first English Puritans, known today as the Pilgrims, from Plymouth, England to the New World in 1620.[1] There were 102 passengers, and the crew is estimated to have been about 30, but the exact number is unknown.
24
Mow Cop
Mow Cop is also noteworthy as the birthplace of the Primitive Methodist movement. Starting in 1800, Hugh Bourne from Stoke on-Trent and William Clowes from Burslem began holding open-air prayer meetings.
25
John Wesley
27
O hush the noise, ye men of strife, And hear the angels sing.
Taken from "It came upon a midnight clear".

Yet with the woes of sin and strife The world has suffered long; Beneath the angel-strain have rolled Two thousand years of wrong; And man, at war with man, hears not The love-song which they bring; O hush the noise, ye men of strife, And hear the angels sing.

26
Florence Nightingale
28
The Salvation Army
29
Church door, Vicar & Readers
The modern office of Reader was introduced in 1866. It is the office of a licensed lay minister and, for this reason, a person holding the office is referred to as a "lay Reader" in many parts of the Anglican Communion.
30
The Organ 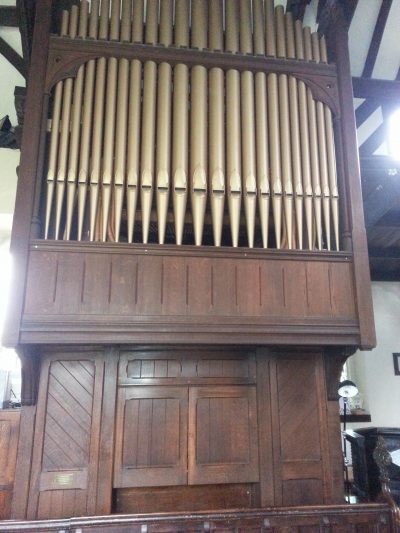