The window was dedicated on 7th February 1919. For many years, details of its origin and commissioning had stubbornly remained a mystery. Parish records had been searched and had failed to reveal any information at all about the commissioning of the window. However, in August 2018, as part of the Heritage Lottery funded Church History project, the mystery has finally been unravelled.

Anne & David Becket of Betley Local History Society have undertaken further research and their findings are summarised in “A Tale of Two Windows” – please see the accompanying tab on this website. Has the mystery been finally solved? Well – yes we think it really has! But, as The Tale of Two Windows paper states – “Nothing can be proven; it is all on the balance of probability”. The new research makes really interesting reading and answers many of the questions we have been asking for decades.

In most UK churches, war memorial windows have the names of the fallen inscribed in the glass, or in a plaque by the window. Failing that, they are linked to a Roll of Honour within the church. In this case there is no evidence that a Roll of Honour was produced at the time the window was dedicated. A paper-based Roll of Honour positioned on the window sill has been created over the years and was most recently updated in 2003 following research by Phil Coops, a member of Betley Local History Society. This Roll is used at the annual Remembrance Sunday Service. As part of the 2018 History Project, a Roll of Honour plaque is now to be installed adjacent to the memorial window. As part of the 2018 History Project a Roll of Honour, made of white marble on a slate background, was installed adjacent to the memorial window. This was unveiled at a church service on Sunday 3rd March 2019 and dedicated by Rev. Peter Chantry. 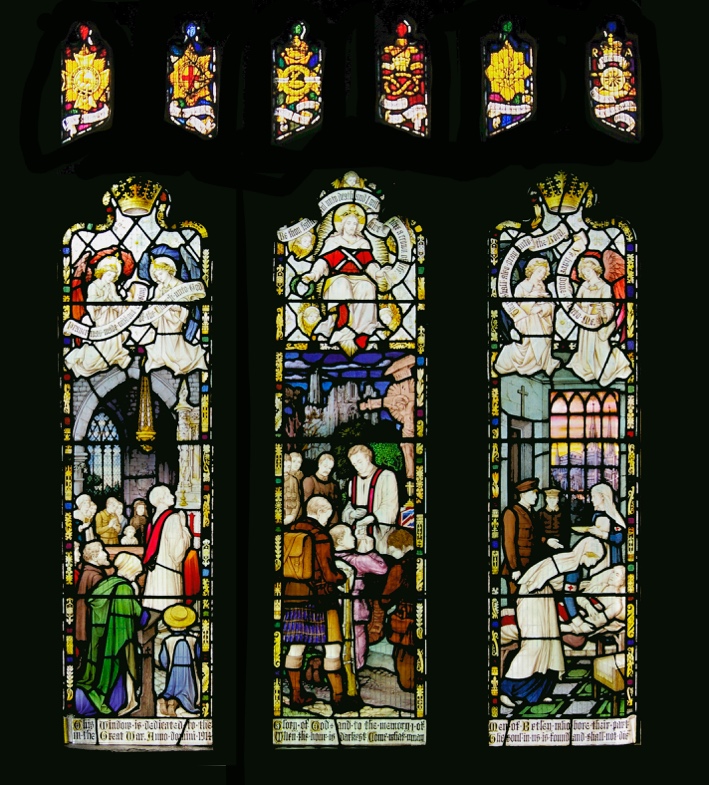 1
Tracery Lights
The six tracery lights at the top of the window depict the coats of arms of some of the Regiments in which Betley men served. Left to right: Bedfords, Coldstream Guards, Sherwood Foresters, North Staffs, Cheshires and Royal Artillery. The inscription underneath the window

This window is dedicated to the Glory of God and to the memory of the men of Betley who bore their part in the Great War, Anno Domini 1914. “When the hour is darkest ! Come what may The soul in us is found, and shall not die.” Lawrence Binyon

2
Left Tracery
Clergyman offering War Intercessions in a church in England to parents, a young wife and a child with others present.
3
Central Tracery
The Last Communion before battle – in the open, by a wayside crucifix. In the distance is a wrecked French cathedral. The Chaplain depicted is a portrait of the Bishop of Lichfield at that time – J.A.Kempthorne
4
Right Tracery
A Red Cross hospital in France depicting a wounded soldier, two nurses, a surgeon and an orderly.
5
Left Hand Upper
Two angels bearing a scroll with the inscription:

“Prayer was made without ceasing of the Church unto God.” Acts 12.5

“They also shall pray unto the Lord.” Ecclesiasticus. 38.14

7
Central Upper
Our Lord in glory holds a wreath of olive leaves: and on a scroll is quoted

“Be thou faithful unto death, and I will give thee a crown of life.” Revelation 2.10

The Design and Manufacture – A J Dix
The window was designed by the firm of A J Dix of London and is signed A J Dix 1919. Arthur Dix was born in High Wycombe in 1860. By 1881 he was working as a decorative artist based initially in Berners Street London, later moving to Gower Street. It was about this time that his work went on display at the Royal Academy. Dix built the business up and his work, and that of his successors, is to be found all over the UK, mainly in churches and public buildings such as town halls. Arthur Dix died in 1917, just before the Betley Window was commissioned – the firm continued in operation until 1940. The firm’s premises were destroyed in the Second World War, and there are no records available. However St. Margaret’s has a handwritten description of the design of the window.

The Clergy at the Dedication
The Vicar of Betley at that time of the dedication was the Rev Sir Robert Boughey (Bart), formerly of Betley Court whose ancestral home was Aqualate Hall, (near Newport), Shropshire.  Sir Robert died in 1921 at the age of 78. He did not preach at the Dedication Service and a photograph taken of him at a Flower Show Committee in 1919 portrays an old sick man.Instead the Prebendary Royds, Rector of Haughton, a village close to Aqualate Hall, led the Dedication Service. Apart from the clear links between the Parish of Haughton and the Royds family, there are also links between the families – Royds, Fletchers and Bougheys.It is plausible, but unproven, that the window was funded from the Aqualate Estate, and an exploration of this possibility has now been undertaken by the Betley Local History Society. 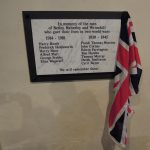